6.30pm Cast and crew are introduced to the audience.

a film by Anna Tchernakova

Marina, a forty-year-old Russian woman, lives in a small English village. A few years ago she married Gregory, a village garage owner. A journalist and a writer in her previous life, she now works at a local hairdresser’s and in her spare time writes for the village Parish magazine. Gregory loves her, but Marina doesn’t feel happy and satisfied with her life – and can’t really explain why. A chance encounter with a touring classical string quartet from Moscow throws her out of her daily routines, and unexpected love opens up all the questions which Marina has been hiding deep inside…

It’s a story about people who are moving from place to place in search for home, and can’t find it anywhere. It’s also a story about middle age – the age when one has already (or not) achieved something in life, but when there is still time to start everything anew. And it’s a story about a standing stone on the outskirts of a small English village where, as some of the villagers believe, aliens might land one day…

Born in St.Petersbourg, Russia. Trained as a film director in the acclaimed National Film Institute (VGIK) in Moscow, Anna Tchernakova has worked as a writer, film director and producer since 1993. Her films have been featured at international film festivals, including Moscow, Tokyo and Montreal.

Born August 15, 1968. Enrolled at VGIK in 1986 and was called up a year later. After he was demobbed he returned to the VGIK (Alexander Galperin’s workshop and later Alexander Knyazhinsky’s workshop). Graduated from the VGIK in 1993 and shot the short film “The Bridegroom” (“St.Anne” prize for photography). In 1998 he shot the medium-length “Crossroads” (directed by Arko Okk, Estonia). He was one of the cameramen working on the TV serial “My Frontier” together with Leonid Kazakov and Alexander Degtyaryov (director Ivan Solovov, 2003). He made commercials and clips.  In 2006 he shot the feature film “The Wedding Chest” (special prize for the best camerawork at the “Golden Knight” Film Festival, Russia, and “The Golden Minbar” for the best camerawork in Kazan, Tatarstan). In 2009 – “Season of Mists”, director Anna Tchernakova) and “The Ferry” (director Dmitry Makeev). In 2010 – “Zone of Turbulence” (director Evgenia Tirdatova).

Born in Yorkshire in 1943. His first musical reputation was as a jazz bassist working in the early sixties with improvisers Derek Bailey and Tony Oxley. He abandoned improvisation in 1966 and worked for a time in the US with John Cage. From 1969 to 1978 he taught in departments of Fine Art in Portsmouth and Leicester, and during the time that he taught at Portsmouth College of Art he was instrumental in founding the legendary Portsmouth Sinfonia. He founded the music department at Leicester Polytechnic (later De Montfort University) and was professor of music there from 1986 to 1994. His first major work as a composer was The Sinking of the Titanic (1969)and Jesus’ Blood Never Failed Me Yet (1971), selling over a quarter of a million copies. He has composed prolifically for the theatre and dance as well as for the concert hall and has written three full-length operas. His first opera, Medea was staged by the director Robert Wilson in Opéra de Lyon and Opéra de Paris in 1984. His second opera, Doctor Ox’s Experiment (based on a story by Jules Vernes) was staged by the Canadian film director Atom Egoyan for English National Opera in 1998. The third opera, “G”, was commissioned by Mainz Opera and was premiered in February 2002, staged by Georges Delnon, in the newly refurbished Mainz Opera House. Among Gavin Bryars’ other works are three string quartets, a series of vocal works for The Hilliard Ensemble including Glorious Hill (1988), Incipit Vita Nova (1989), Cadman Requiem (1989, revised 1998) and The First Book of Madrigals (1998-2000); works for the opening of the Tate Gallery in Liverpool (1988).Among Gavin Bryars’ numerous recordings are “Three Viennese Dancers”, “After The Requiem”, The Black River and “Vita Nova” on ECM New Series, “The Last Days” on Argo (1995), and “Jesus’ Blood Never Failed Me Yet” (1993), “The Sinking of the Titanic” (1994), “Farewell to Philosophy” (1996), “A Man in a Room Gambling” (1997) and “Cadman Requiem” (1998). The Gavin Bryars Ensemble, founded in 1981, regularly tours internationally, including appearances in France, Italy, Spain, Portugal, Norway, Finland, Belgium, Germany, Holland, Austria, Japan and Australia, as well as giving occasional concerts in London.

Member of the European Film Academy and the “Nika” National Academy and is a president of the “Kinoglaz” Com. Born in Moscow, Russia. Graduated from the Gnesins Institute of Music and the Cinema History Department of the VGIK (State Film School) in 1985. Worked at the State TV and Radio, in the magazine “Soviet Screen”, was the chief editor of the “Kino-Glaz” and “Audio Video Business” magazines. Was the program director of the “St.Anne” competition and other festivals. Since 1995 she is a programmer at the Moscow International Film Festival. She is the author of numerous articles and books on Russian and foreign cinema. She was the co-author of the script to the documentary film “Your Leaving Object Leonid Obolensky” (Grand Prix of the IFF in Nyon, Switzerland, 1991) and the author of the scripts of the documentary film “Farewell, Cannes” (2003) and feature “Zone of Turbulence”. She is the holder of the Vera Kholodnaya award, the “White Elephant” prize of Film Critics Guild of Russia, the “Golden Hat” prize of the Russian Film Producers Association and the “Young Artists Award” (USA), “best producer” prize at the Open Russian film festival (2006). As producer she released the short films “Sanzhyra” (directed by Nurbek Egen, 2002), and “The Day Off” (directed by Alla Savina, 2008),  features “The Kite” (directed by Alexei Muradov) which were awarded 12 prizes at international  film festivals, “The Wedding Chest” by Nurbek Egen (Russian-Kirghiz-French-German co-production) which won 15 Russian and international prizes and was submitted for the Oscar, “Season of Mists” (dir. Anna Tchernakova), Russia-UK. As a director she made the feature “Zone of Turbulence” (2010).

UK-born producer, journalist, consultant, and entrepreneur. He was co-founder of the British Independent Film Awards, as well as the “Financial Times” stable of newsletters on media and telecommunications and a series of other media initiatives. He is chairman of The Independent Film Trust (IFT), a UK charity which exists to advance the cause of independent filmmaking, co-chair of the Cambridge Film and Media Academy, an alumnus group for people working in film, television and new media, and UK representative of the Moscow International Film Festival. He has produced a number of short films. “Season of  Mists” is his first feature. He is a regular contributor on media and telecommunications to newspapers and radio and television programmes, including BBC TV’s News and Newsnight, BBC World Television, BBC News 24, Sky Television, CNN and Radio 4’s Today and The World at One. Neil was founder chairman of the “Financial Times” Global Telecom Awards, a member of the juries for the Mobile Entertainment Awards in 2004 and 2006,  and a member of the judging panel for the annual GSM Association Awards that were awarded at the 3GSM World Congress in Cannes in February 2005. He was also a member of the jury for the Faithful Heart festival in Moscow in October 2008.

Graduated from VGIK in 1995 (Anatoly Romashin’s workshop). Played in features  “The Man For the Young Woman” (Russia, dir. M.Ibragimbekov), “Kodak” (dir. M. Popov), “Black Coffee” (Finland), “The Police Drama” for BBC and others. Worked in “The Theater of Luna” (Moscow) in different theaters of London (played Irina in “Three Sisters” by A.Tchekhov, Margarita in “Master and Margarita” by M. Bulgakov) and others. At present lives in London.

Born in 1965 in Tula city (Russia) in the family of actors. Заслуженный1 артист России. In 1986 graduated from the Theater school by the name of Schukin and started to work at the Lenkom Theater. In 1993 he participated in the first performance of The Independent Theater project “Playing Zhmuriki”.   Worked in The Oleg Tabakov’s Theater (“Psyco”, “The Old Quarter”).  Played the role of the prince Shadursky-Jr.  in the popular TV series “Mysteries of St.Petersburg”.  Was the voice in many commercials.  His writer’s debut was “Not Significant Changes” (2000). In 2003 he published his second book “The Train Man”.  Awarded “Seagull” prize (Nosdrev in “The Mistification”, I.Smoktunovsky prize. Played in features and TV series: “Family Mysteries”,  “Azazel”, “The Theater Blues”, “Farewell Doctor Freid”,  “I Love You”, “The Rope From the Sand”, “The Man of No Return” and others.

Actress of cinema, theatre and TV.  Played in films “Missis Dalloway” by Morlin Gorris (Miss Pym, 1996), «Отверженных» by Bille August” (Madam Gilo, 1997), “The Cook, Thief, His Wife and Her Lover” by Peter Greenaway”, “Nine Lives by Thomas Katz”, “Omen” (2006). She played on stage in “The House by Bernarda Alba”, “Separate Tables” etc. Played in TV series “Oliver Twist”, “Alice in the Wonderland” and others. 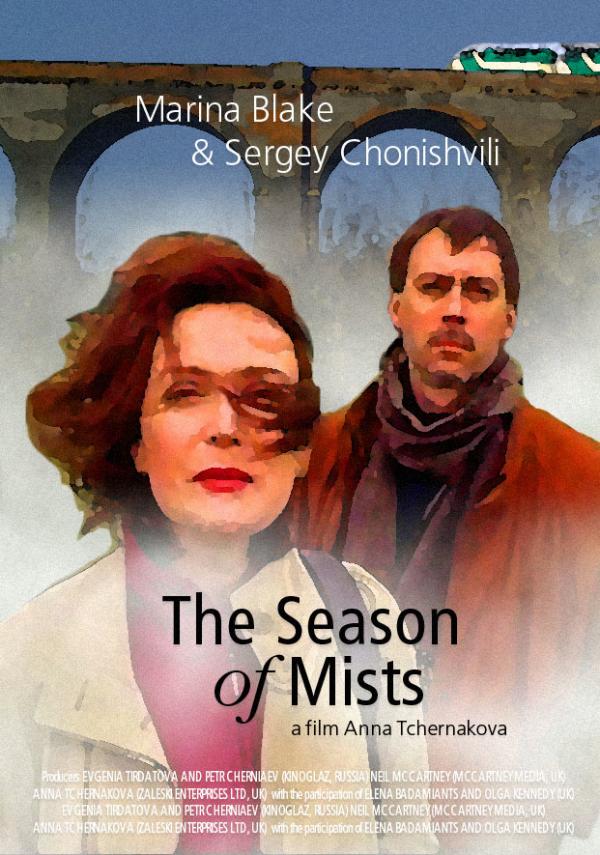