In 1992 I was appointed music juror for the Akademie Schlöss Solitude, an extraordinary place and an even more extraordinary concept. At the time I was there, 7 disciplines were covered within the Akademie and the Akademie director, Jean-Baptiste Joly, appointed a chairman – then Johannes Cladders – who selects, for each discipline, a juror whose task it is to select people to work and reside in the Akademie. Just as the chairman’s choice of juror is not subject to question, so the individual juror’s choice of guests is not subject to query or apeal. Of course everything is discussed with the director but, in the last analysis, the juror’s decision stands, and it is the choices of the individual jurors (and the chairman) which determine the hugely varied character of the Akademie. The chairman is in place for four years, and the juror for two.

During my time there I developed many friendships and professional relationships which endure to this day, with Jean-Baptiste, with the fine art juror Jean-Hubert Martin (with whom I worked in Oiron) and especially with, then, design juror Pia Quarzo Cerina.

This year the Akademie Schloss Solitude celebrates its twentieth anniversary with a series of events and projects – taking into account the various activities realized since 1990. Since its foundation, more than 150 fellows in the field of music – most of them composers – have been residents and supported by the Akademie. The concert on July 17 2010 focused on Solitude composers during the festival “Der Sommer in Stuttgart 2010” organized by the Staatsoper, Musik der Jahrhunderte, the SWR and the Akademie Schloss Solitude taking place from July 16 to 18, 2010.

For the Akademie’s anniversary evening at the Theaterhaus, the festival organizers – Christine Fischer, Hans-Peter Jahn, Xavier Zuber and Jean-Baptiste Joly – planned four concerts in four different rooms; each with a different ensemble constellation featuring short compositions by as many former composition fellows as possible. The “Tristan Chord” functions as the connection between the individual contributions. This is the instrumentation:

Each invited composer selects one concert and composes approximately 120 seconds for the respective instrumentation. As a rule of the game, each composition should begin and end with the Tristan Chord (B-F, D#-G# or Eb-Ab), thus separating the individual compositions for the listener during the concert.

For this event I wrote The “Solitude” Madrigal, setting a short sonnet – in effect a kind of half-sonnet – by Petrarch (“Nova angelleta” Rime Spare 106).

The event seems to have been a great success and I copy below the message that I received from Jean-Baptiste Joly immediately afterwards.

Almost 10 am in Stuttgart, waking up after a long and beautiful evening you are the first (who wasn’t in the concert) whom I can write what a great great success it was! The 45 pieces where a unique moment of music and happiness. Among the composers involved more than 20 joined, the audience (over 200 people) was sitting in the middle of a large concert hall with five stages around, two for the singers (who were moving around the space during the evening), one for the Ensemble Ascolta, one for the two piano-players (one of them was Sven Kiebler who you selected when you were our juror), one stage for the two percussionists with tons of equipment and an infinity of sounds. We had asked a young Brazilian stage-director to organize the whole evening, the setting, the order of the pieces: Marcelo Gama made it in a perfect way, finding the right way to move from one piece to another with light, finding always perfect bridges between the pieces. Your piece was performed by the Neue Vocalsolisten quite at the beginning of the concert (fourth piece). The concert began outside with a Salute to Solitude by a Russian composer, then a kind of brass music to accompany the audience into the concert hall, when everybody was sitting the next piece was by Rolf Riem (two pianos), then yours. We were so happy to meet again Ian Willcock (who you also selected) who came with his two daughters, Molly now 18 years old was a few months old when he came to Solitude. After two and a half hours of music the musicians got huge and long, long clappings, flowers for everybody, hugs etc.

A great gift to Solitude made by the composers, the interpreters, all the artists who contributed.

Thank you so much, dear Gavin for having been a part of it.

Kindest regards to you and your family 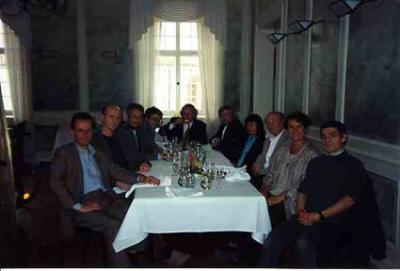