Over a year ago I planned a concert with my ensemble and David Wordsworth’s Addison Singers to be part of the yearlong festival Minimalism Unwrapped at Kings Place. It included the fairly obvious Jesus’ Blood Never Failed Me Yet, which dates from 1971 – the early period of Minimalism. I made a new instrumental arrangement for the piece as well as writing a further cue for the choir in addition to the three that already existed and which we’d used at St Pancras Parish Church a year ago. We had a stellar string section for the occasion, comprising four violas, four celli and two basses, plus electric guitar and tenor horn, as well as the four musicians from The London Snorkelling Team that I’d worked with at the College of ‘Pataphysics’ New Year’s Eve event in September (see www.gavinbryars.com/journal/pataphysical-new-years-eve-september-7-2015). Among the strings was one of the world’s finest viola players, Garth Knox, who had also been at the ‘Pataphysical dinner, and who graciously, and happily, agreed to play third viola…

With the London Snorkeling Team: 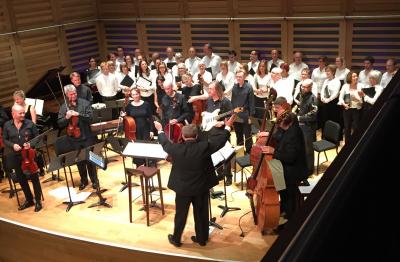 Given that the Vice Curatrice of the Collège de ‘Pataphysique was in the audience, it is worth noting the high proportion (40%) of ‘pataphysicians in the ensemble…

In addition to Jesus’ Blood there were some instrumental pieces by my ensemble as well as a new lauda, Lauda 44, written specially for the Addison Singers. And we also decided to include a version of Cadman Requiem that I had made for choir and my ensemble.

The original version, composed shortly after Bill Cadman’s death in the Lockerbie bombing, was for the four voices of the Hilliard Ensemble (counter tenor, 2 tenors and baritone) with a string trio (2 violas and cello). This instrumentation became a six-part viol consort for the Point Records recording in 1998 and for the Lockerbie Memorial Concert in December 1998, when Fretwork played with the Hilliard. A recording of this concert was subsequently released on GB Records (BCGBCD03) and is still available.

The Hilliard Ensemble performed the requiem many times over the following years, but their very specific and unusual combination of voices meant that it was not likely to be performed by other groups. So, in due course I arranged it for five-part choir (SAT BarB) with organ accompaniment. I made a recording of this version with the Latvian Radio Choir and this was released on my second album with the choir, (BCGBCD09 “Glorious Hill”). I also made a further arrangement, for male choir, and performed it with the Estonian National Men’s Choir as Kaspars Putnins conducted both them and the Latvians. 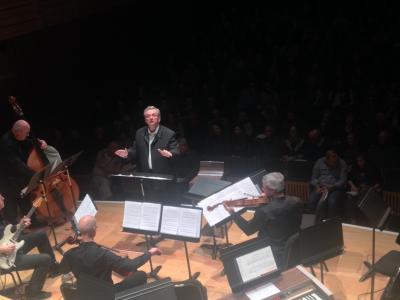 In 2009 I made a new version for a concert with John Potter’s choir at York University, The 24, that uses exactly the same vocal arrangement as the choral version, but replaces the organ with my four-part ensemble – viola, cello, electric guitar and double bass. As the Kings Place concert on October 24 2015 featured my ensemble both with and without choir, we performed this version – only the second time.

The performance was very good indeed: there was a virtually full house, the choir sang beautifully and David had found two excellent soloists, tenor Tom Kelly and baritone Thomas Flint, for the two solo sections of the work.

Two years ago I wrote a journal entry about the funeral of Rita Cadman, Bill’s mother, and that occasion was the last time that I saw Martin, her husband. Bill’s brother Richard kept me up to date about Martin and sent me a touching photograph of him in his care home that had their wedding photograph in the background. 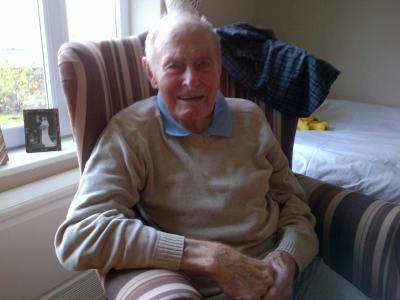 Martin died peacefully on October 7th aged 91, and I dedicated the performance of Cadman Requiem at Kings Place to him. The piece had become an important one for him, and for the whole family, and they came to as many performances as they could – Richard had even been at the premiere in France in April 1989. The funeral took place on Monday, October 26th, just two days after the concert. Quite remarkably Martin’s grandson William, a professor of physics at the University of Chicago, had got an earlier flight from America and Julia managed to get four tickets for the performance (which was virtually sold out) so that four family members were able to be there!

My son Yuri (who had played bass in Jesus’ Blood) went with me to the funeral, which was held in the same church in North Norfolk as Rita’s – the very beautiful St Margaret’s Church, Burnham Norton. Martin and Rita are buried in the same church graveyard from where, looking north from the low hillside, the sea forms a blue line on the horizon just beyond the flat land below the church. The church is an unusual one, having a circular stone tower like a few others in the area, which, as Yuri discovered, means that it predates the Norman Conquest. Just like the day of Rita’s funeral, the weather was sunny and bright, though a little chilly and in a sense the whole occasion was like a mirror image of that day: Rita was buried in the Spring, shortly after the clocks went forward an hour to summer time; Martin’s funeral was in the Autumn, two days after the clocks were turned back to winter time. 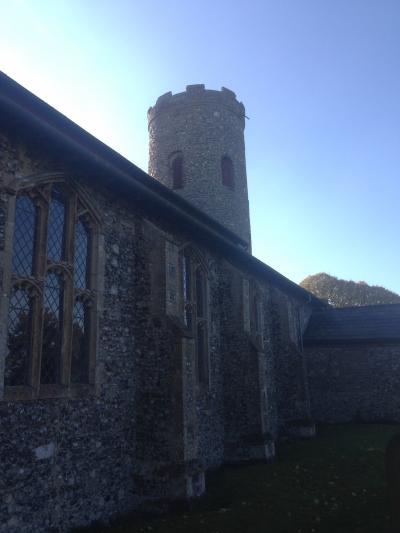 As before the whole family was there. The funeral was quite simple and each member of the family made a personal contribution. The Processional Music was Verdi’s Chorus of the Hebrew Slaves that had also been played at Bill’s funeral in Putney in 1989, though here played very touchingly on the one manual organ. Martin’s daughter Julia read “Thought of St John Chrysostom” and Marion read Wordsworth’s poem “Composed upon Westminster Bridge, September 3, 1802” – the choice reflecting Martin’s great love of London. His granddaughters Lucy and Rebecca read Thomas Hardy’s “Heredity” and granddaughter Cecilia sang a solo – as she had at Rita’s funeral, though this time singing the first verse of a hymn (courageously) completely unaccompanied. The hymn was “O Ruler of the earth and sky” reflecting Martin’s love of flying and which I didn’t know, except in its original maritime version “Eternal Father, strong to save” (my elder brother was at sea). In fact, when Richard and Jane got married they had “Eternal father” in the service. And on that occasion it had been dedicated to the location of the church (in East Fife, at a small church in St Monan’s – the “church closest to the sea” that became the title of a later piece of mine) and to Bill. When he told Martin that they were going to do this, he told Richard that there was an airman’s version of the same hymn, which was the first he knew of it.

Richard gave the eulogy, eloquently and without notes, which elicited the surprising fact, for me, that Martin had composed music! In knowing Martin for nearly 27 years I had no inkling of this. But I then noticed that the Order of Service listed the Recessional Music as “Happily Ever After by MH Cadman” and, sure enough, there was an upbeat show-type tune to take us out, smiling…

Martin was absolutely devoted to Rita and to his entire family and was one of the most remarkable men I have ever known. He had many practical skills and I spent one afternoon driving with him along narrow Norfolk roads in the Triumph Roadster that he was constantly renovating: people moved to one side and applauded as we drove past. He had a very strong sense of right and wrong and he was the most persistent debunker of myths and pomposity. He was also the most indefatigable and (as Richard put it) incisively “forensic” questioner of officialdom, government ministers, police and lawyers in his search for the truth about Lockerbie. His pursuit was invariably courteous but ruthless and he won the respect of both the victims’ families and those who were the object of his questioning.

The funeral had been very beautiful and afterwards I spoke with Derek, the quietly impressive and solidly built sexton who I’d spoken with before Rita’s funeral. He remembered me and we shared a powerful handshake. He had dug Martin and Rita’s grave by hand, just as he had with the majority of the graves in this churchyard, as well as in about a hundred other graveyards in the area over the last 38 years…

V In Paradisum (from Cadman Requiem) 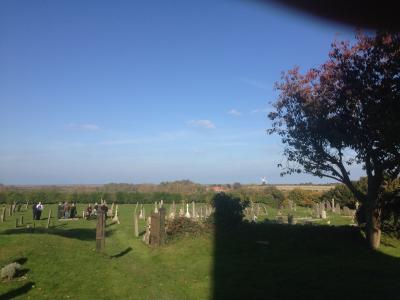 The former labour MP Tam Dalyell, very much involved in Lockerbie, wrote a fine obituary for Martin in The Independent. It includes my favourite photo of Martin, climbing into (or out of) the cockpit of an RAF fighter plane – a Harvard – with the confident, cheerful, positive expression that typified the man.