Gavin Bryars: The Island Chapel (1997) for voice and ensemble

Gavin Bryars: The Adnan Songbook (1996) for soprano and ensemble

The event at the Whitechapel Gallery, part of a series Music for Museums, brought together the various ways in which I have worked with my dear friend Etel Adnan over the years.

I met Etel Adnan for the first time in February 1984, in the monastery of La Sainte Baume in the mountains inland from Marseille. I was composing the French section of Robert Wilson’s monumental The CIVIL WarS and she was to be the writer, the librettist, for my section of the opera. The work there was the hardest thing I have ever done in my life. Effectively we had two weeks to make an opera out of nothing. Etel’s task was to provide texts, mine was to set them to to music. We were attempting to draft a three-hour opera in only two weeks!

Etel and I got on very well and became very good friends. The opera, however, was never completed and little remains from it. The whole project eventually had to be abandoned but I kept my setting of Etel’s poem La Reine de la Mer that I wrote there, and included it in the cantata Effarene (the name of a Jules Verne character in a little known short story), which had its premiere four weeks after we left La Sante Baume. It was later also included in The Paper Nautilus.

The most substantial piece that I wrote with her is the Adnan Songbook (1992-6), for soprano and six players, which sets eight love poems from her collection The Indian Never Had a Horse. In many ways this work is a kind of portrait of my ensemble since it was written very specifically for these musicians, and Anna Maria Friman is the perfect singer for the solo soprano part.

In 1997 I wrote another work, The Island Chapel, for the Tate Gallery St Ives to be performed in a tiny chapel (capacity ten people) on the cliffs overlooking the Atlantic Ocean. I set two self-contained poems Crossing no.3 and Crossing no.4 from Etel’s extended poem The Manifestations of the Voyage. This was initially just for voice, keyboard and cello – which meant that there could only be six people in the audience. I later expanded it for my ensemble as well as chamber orchestra. Since then I have occasionally accompanied Etel reading her own poetry – at Michael Shamberg’s Turtle event at Chelsea ArtSpace in 2006, at the Serpentine Gallery’s Poetry Marathon in 2013, and now here, where she reads her poem Five Senses for One Death, while I play keyboard. For me, Etel is a great, great writer and an artist of the highest quality and greatest integrity. She is also a wonderful human being whose company I enjoy and whose friendship I cherish.

Live performance as part of Music for Museums, Whitechapel Gallery, 2015 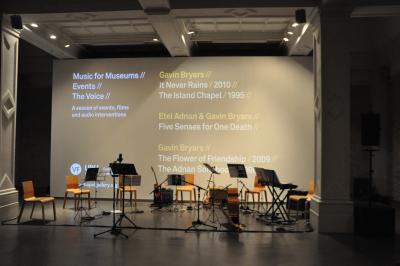 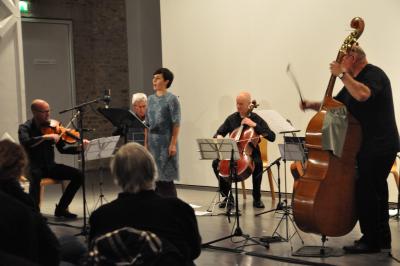 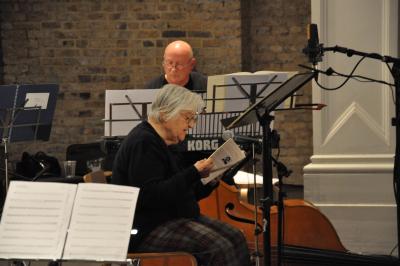 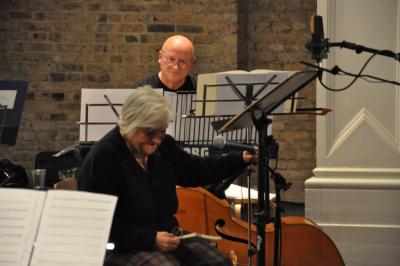 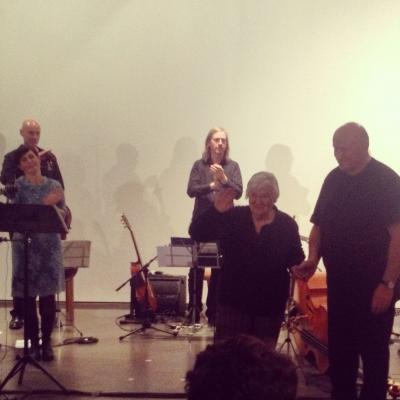