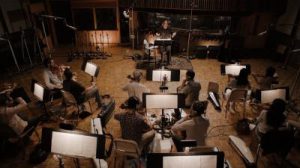 Father John Misty’s album Pure Comedy, for which Gavin arranged two pieces, is to be released in April, followed by a tour of live performance. In the meantime here are links to two YouTube items: the Official Music Video, which uses the title track, and Pure Comedy, the film. This latter is a 25 minute black and white film by Grant James that follows the recording and has footage from the studio, including moments where Gavin is conducting and talking in the control room at Ocean Way Studios. The Official Music Video