On February 19th, 2010, the moment had finally come, to which the Borletti-Buitoni Trust and I had looked forward for four years: the première of Gavin Bryars’ Piano Concerto ‘The Solway Canal’, a co-commission of the BBT and the Dutch radio. I clearly remember the very first visit to Gavin’s place in Leicester almost half a decade ago, together with David Hoskins and Graham Johnston, in which we laid out our very first ideas. Already at that time, I definitely felt a pleasant artistic and personal ‘click’ with Gavin. Now, Four years later, that feeling proved to be correct.

It had been a busy and intense time, both shortly before and during the week of the rehearsals for the piece. As Gavin works meticulously and very detailed, it was only after last Christmas that I received the first notes. It struck me that Gavin had fulfilled all expectations – the piano was treated purely as a melodic instrument. Quite a difference with most contemporary composers, who in the twentieth century value the instrument for its percussive qualities in the first place! Although the piano part did not look directly as a traditional virtuoso type of music, I was immediately challenged by how to make a keyed instrument such as the piano, without possibilities for portamento playing, pure legato playing or vibrato, sound like a stringed instrument. On top of that, as with music such as by Mozart, it seemed that every note became very intense, in the context of its sparsity.

Gradually I received more pages, and it was clear that the piano part remained as intense the full 28 minutes. No large outbursts of notes, but the role of a guide, leading the orchestra and the choir into new territories of sound colours, landscapes, all passing by in a floating way, as if in a dream. Indeed the poetry by the Scot Edwin Morgan, sung by the male choir, added to this almost unreal feeling by its mystical descriptions of foggy natural scenes. The slow pace of the piece contributed to its static, almost processional-like character.

At the first rehearsal, which was without the choir, the beauty of the notes which I found on the pages, turned out to be as beautiful when actually sounding. Although the piece indeed had a very tonal feel, it was far from consonant at times – something which became clear especially because of the absence of the choir. There were even sections where the strings would create a seemingly disjointed tapestry of unrelated singing sound, mildly chaotic, reminding of the works by Charles Ives, or perhaps even Xennakis. However, the incredibly soft dynamics at those spots somehow concealed its radicalism, especially after the choir joined. In the end, within the context of the piece, it seemed to sound just in another world of the subconscious, hardly to be noticed, but silently being very present.

With the première on Friday, Gavin joined our rehearsal on Thursday. He had a busy day – having to get up at 3.30 AM to be in Holland at 9.45 AM, with a full day schedule ahead. His presence at the rehearsal made a lot of difference – a few tips of advice, such as having more sense of rubato playing in the piece, suddenly brought it into a new daylight for me, and for the orchestra. It very much contributed to its dream-like, floating atmosphere. 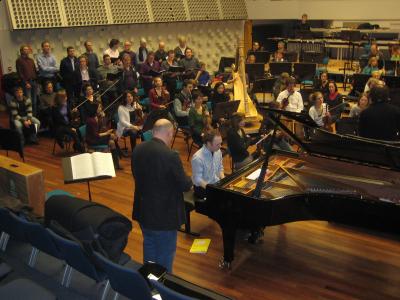 After the rehearsal, Gavin and I quickly jumped in my car to drive to the concert hall of the Conservatory of Amsterdam, where we would record his piano duo piece “My First Homage” for CD. This recording will ultimately be joined, amongst others of his piano works, by the Concerto. Some intense hours later we were finished, which meant that Gavin and I had to rush to another part of the building, where he would give a lecture for the composition students of the conservatory. The two hours that followed brought a unique light on the metier of composition, and gave a deep insight into Gavin’s musical world and ideas. The day was closed by a dinner together, which was a good opportunity to wind down, gain new energy for the next day and even think of future plans. 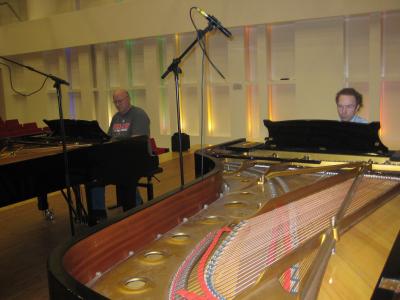 That Friday was the big moment. In the well-occupied concert hall of Utrecht, Gavin’s Concerto sounded for the first time, in presence of the composer, Susan Rivers from the Borletti-Buitoni Trust, and Sarah Osborn from music publisher Schott. I think that this was the best performance since the rehearsals, as the adrenaline of all musicians made it more intense. Luckily there was a live radio broadcast, which made it possible for me to immediately listen it back afterwards, to conclude which spots or aspects of the piece could still be improved for the concert the next day. However, this performance generally went well and quite a large portion of the audience gave a standing ovation to Gavin and the musicians. A little party belongs to a first performance, and this was organized, making Susan, Sarah, Gavin, I and many others drink a good glass of wine (and Diet Coke) afterwards!

On Saturday, we did the second performance. This time I had heard the recording, and the conductor and I looked at some spots to once more rehearse before the concert. It was quite important to do this, as this performance was to be recorded live for CD. It certainly had still improved upon the previous performance, and the great acoustics at the concert hall in Amsterdam helped the balance between piano and orchestra a lot. After the performance, audiences again were very enthusiastic. It was a great honour for me that this time, David Hoskins and Graham Johnston from the BBT had come all the way from the UK, especially for this occasion. The day was concluded with a very nice dinner in Amsterdam with Gavin, David and Graham with their partners, and my girlfriend, closing off a period of four years in which a seed had grown into a full-grown organism. 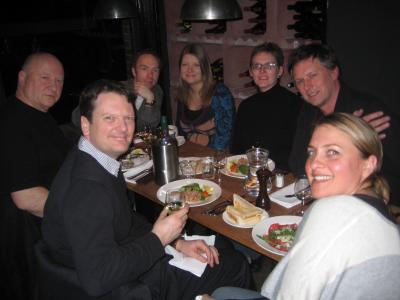 I think the Piano Concerto by Gavin Bryars takes on a unique place in piano concerto literature. First of all, because it has a rather uncommon orchestration of piano solo, orchestra and choir. Second, because the piano takes on a role which is quite radical: virtuosity is not anymore defined by playing as many notes as possible, but by another element which I think is, at times, overlooked by musicians and composers: that of complete ‘control’ over the instrument. Control, in my opinion, not only means being able to control technically difficult passages, but also means being able to play just a few notes as one wishes, i.e. with the right colour, tone, intention and dynamics. I think the concerto is challenging, because one cannot hide himself or herself in technical display. Here it comes down to playing relatively few notes in such a way, that they start to mean something, and that they move people. Gavin asks for an intrinsic way of music making, which is averse from musical acrobatics. Especially nowadays, in which very flashy television and radio make many people used to needing just very short attention spans, this piece forms an interesting counterpart, which we generally are not used to anymore.

The reactions of reviewers to this work have been very different and opposite. In general, I think this can be interpreted as a positive sign, as most radical works in the past have generated the most extreme reactions. Some newspapers praised its gripping melodic lines and the dream-like qualities; others have turned down its melodiousness, calling it simple and comparing it to 19th-century music. I personally think that especially the latter reaction is caused by a misunderstanding. It seems almost a Pavlov-like effect that whenever a composer nowadays chooses to use consonance as a basis for his tone language, a (denouncing) comparison is made with the old masters. It also happens to other composers, such as John Tavener or Arvo Pärt. This notion of comparison may be valid when listened to in a superficial way; after all, indeed the same tools (consonances) are used. However, when listened to with a more open attitude and especially open ears, one can discover that although consonances are used, they are used in a completely different way and with a different intention than the traditional composers did, two centuries ago. In this post-modern period, composers have about three centuries of music to absorb, and it is hard to reason why they would have to deny most of the roots of Western musical history, based on tonality. We are still enjoying Beethoven, Liszt, Strauss and Mahler, why suddenly turn down the new lyricism as an expression of aspects of today’s world? I very much think that Gavin’s music is music of our own time, of our present-day feelings and experiences. He uses both known and new sounds to express his own message, and to evoke the mystical world of the contemporary poetry. Although seemingly accused of being old-fashioned by some, I think his choice of style is very radical nowadays, in that very sense.

Additionally, indeed one could object to the piano not having a traditionally significant role. However, it is as interesting and valid, in my opinion, to see another approach to music, different to what is usually expected. Personally, I am in favour of any style – whether it be Boulezian, Cageian, or Chopin – as long as a musical work has its own meaning. It makes the world of music very rich to have it all available!

I am very happy that the Borletti-Buitoni Trust has supported the birth of the work, and that they continue supporting traditional music, new music, established artists and upcoming artists. It is the hard work of people such as Susan, David and Debra, and all the others who are associated with it, which keeps the spirit of classical and newly composed classical music alive. For sure, The Solway Canal will give me the great opportunity to play with the BBC Scottish Symphony Orchestra, who immediately expressed their interest in the piece. Also, the cooperation with Gavin will continue in the future, as new projects are talked about. I am honoured that, besides the Concerto, the composer has actually dedicated his newest piano solo work to me, and also this work is a great lyrical counterpart to other great works in an oppositely ‘complex’ style. Long live the Borletti-Buitoni Trust, long live the many musical flavours and moods available today, and long live music itself!