Rita Cadman died on March 25 2013. She was the mother of Bill Cadman, my former sound engineer who was killed in the Lockerbie air crash and for whom I wrote Cadman Requiem. After Bill’s death I got to know his whole family – his father Martin, Rita, as well as his brother and sisters. I would visit them regularly, keep in touch about what we were all doing, and I was a guest at family occasions – his brother Richard’s wedding in East Fife, for example, in a small church in St Monan’s – the “church closest to the sea” that became the title of a later piece of mine.

Rita’s funeral, which was very beautiful, was held on April 6 in St Margaret’s Church, Burnham Norton just outside Burnham Market, where they lived – on a hill, between the village and the sea.

The day was sunny and bright, though a bit chilly. I’d visited Martin a few weeks earlier this year at their house. Rita was in a home and he visited her every afternoon. He came from hospital in a special taxi and was in a wheel chair as he had a stroke a couple of weeks ago. He looked frail, but the longer he was with us his spirits improved and his memory got better and better. I spoke with him a couple of times: once when he arrived at the church, and then again at the house where there were drinks and some food. We had a friendly exchange and I explained that I was also there on behalf of my family all of whom had spent time at Burnham Market. We would usually visit at least on Anya’s birthday, as she likes to be near the sea on that day, and the north Norfolk coast is the nearest coast to us. I’d also been there with Ziella and Orlanda when they were teenagers, and Zie swam in the sea with Martin, and her friend Amy. Zie had also visited Rita’s eldest daughter Marian in L’Aquila, where she and her husband Mark run a language school. The funeral happened to be held on the fourth anniversary of the L’Aquila earthquake that destroyed their home and school. I also told Martin that my former manager Jane Quinn wanted to be remembered to him. I clarified who Jane was by mentioning the 1998 Westminster Cathedral Lockerbie Memorial concert. He smiled and said “ah, yes, Jane. Please do give her my love.”

The whole family was there – children and grandchildren, one of whom, William had flown from Chicago where he is a professor of physics at the university and who I had first met at Richard’s wedding when he was around 10 years old…

The funeral was simple and very effective. Each member of the family contributed. Richard gave a very good eulogy, Marian read a poem by John Clare, Julia spoke the Prayer of St Ignatius Loyola, and the vicar, who’d known the family since they moved to Norfolk over twenty years ago, was very good too. Richard’s daughter Cecilia sang Dvorak’s Lullaby, very touchingly, accompanied by her boyfriend Calum who played the organ for the whole service. In Paradisum from Cadman Requiem was played as a processional for leaving the church. Calum had adapted it so that the vocal parts written for the Hilliard Ensemble were to be on one manual, the two manuals of the organ part were combined onto one. However, the organ turned out to have only one manual, which limited the piece, and some of the pedals were a bit erratic in response (!), but Calum played manfully and it did work and felt right.

I had arrived there quite early, about an hour before the service, and sat in the churchyard, from which the sea is visible just beyond the fields to the North. I spoke at some length with the sexton, a quietly solid local man with a strong Norfolk accent, who had dug graves in over a hundred churchyards in the area, all by hand, and who had dug Rita’s grave too (she is buried next to the church). He was quite remarkable. He pointed out the graves of his sister and his mother – both of which he had dug – and explained the structure of the churchyard and how this area was for people from this village, that area was for another one and so on. He’d done this for 36 years, and knew the Cadman family quite well as he also looked after the church next to their house.

Martin and Rita were devoted to each other and were almost the perfect couple. They would have celebrated their sixty third wedding anniversary this year.

The memory of Rita’s funeral will live with me for a long time. 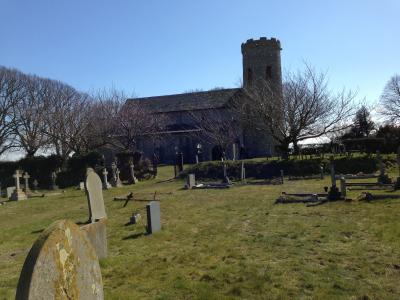