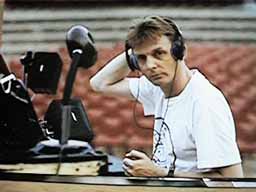 During the 1970’s Dave Smith was a member of the Scratch Orchestra and various composer-performer ensembles (principally with John Lewis, Michael Parsons, Howard Skempton, John White, Gavin Bryars and Ben Mason) and later played in groups specialising in Javanese classical and Albanian folk music. He has been a member of Gavin Bryars Ensemble since its inception and also involved in many other professional performances as pianist, brass player, percussionist or conductor, including British premiers of music by Harold Budd, Cornelius cardew, Philip Glass, Ladislav Kupkovic, Ornette Coleman and Christian Wolff.

For 18 years he was a lecture at Leicester Polytechnic (now De Montfort University) and at present he is teaching at the University of Herts. and Goldsmiths College in London. His educational activity also includes working with COMA (Contemporary music-making for Amateurs.)

Many critics consider him to be ‘one of the most interesting composers working in England.’ His works, mainly for piano, have been broadcast in Europe, USA, Australia and North Korea.