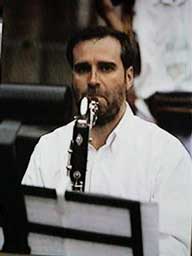 Roger Heaton, clarinettist and conductor, specialises in contemporary music and has worked with many leading composers including Birtwistle, Bryars, Feldman, Ferneyhough, Henze and Volans. He appears at major international festivals as a soloist, with the Kreutzer and Arditti Quartets, as a member of the Gavin Bryars Ensemble and Music Projects London, with his own group, the Roger Heaton Group, and with his duo partner Stephen Pruslin. He has also played with Ensemble Modern and the London Sinfonietta, and as a soloist with them in Boulez’s Domaines and Takemitsu’s Waves.

He records regularly for CD and radio. His first solo CD of multi-tracked works by Reich, Feldman, Bryars and others, was voted one of the top 50 classical CDs of 1995 by the BBC Music Magazine. His recent recital CD with Stephen Pruslin Hymnos – the clarinet music of Birtwistle and Maxwell Davies – was one of the Sunday Times Critics’ best CDs of 1998. He has just recorded Feldman’s Clarinet and String Quartet for release later this year.

From 1982 to 1994 he was Clarinet Professor at the Darmstadt Summer Courses for New Music, and from 1988 to 1993 was Music Director and Conductor of Rambert Dance Company. He is Professor of Music at Bath Spa University College.