Settings of four poems by Laura Battiferri, written for Singer Pur and commissioned by Villa I Tatti

These madrigals setting texts by Laura Battiferi come about from my third project with Villa I Tatti.  The first was a commission from the Morrill Music Library, in memory of Elizabeth and Gordon Morrill in 2004. For this I set a sestina by Petrarca that was performed by the Italian group, Vox Altera, along with a group of other madrigals for six voices that I had written earlier that also set Petrarca. Although new compositions, these works reflect the spirit and aesthetic of the 16th century Renaissance madrigal.

I had first became engaged with the idea of writing music in relation to models from early music when I wrote my first piece for the Hilliard Ensemble in 1988 but it was ten years later that I embarked on a series of books of madrigals. For the first of these books, thirteen madrigals for three, four and five male voices (the Hilliard Ensemble), I set commissioned poems by my friend (and librettist for my second and third operas) Blake Morrison. For these, unusually, I had new poems which were actually designed at the outset to be set to music as madrigals. Having written these, however, and following guidance from the tenor John Potter, for subsequent books I decided to set poets whose work had been used by Renaissance madrigalists and for my second, third and fourth books of madrigals I turned to Petrarch. And, indeed, having started on Petrarch I have stayed with him for a considerable period of time. While the second book, for six voices, sets fourteen sonnets from Petrarch’s Rime Sparse, the fourth book, for eight voices, uses the longer sestina form, from the same collection – and the first of these settings “A qualunque animale” was the piece commissioned by Villa I Tatti.

The second project involved my setting 16th century texts, by Bronzino and Battiferri, as well as two by Petrarca. Although, like my second book,  these are for six voices, the formation of the group Singer Pur is very different, comprising soprano, three tenors, baritone and bass (as distinct from the 2 sopranos, mezzo, 2 tenors and baritone for the earlier madrigals). These were written in memory of  Craig Hugh Smyth, a fine art historian and former director of the Villa I Tatti, who was a specialist in Bronzino and Pontormo and the choice of texts reflects the interests of the dedicatee. Through correspondence with Kathryn Bosi, Music Librarian at I Tatti and, through her, Craig Smyth’s family, I became increasingly aware of his unusual and quite special character.The Bronzino sonnet is a lament on the death of Pontormo, his teacher, and Laura Battiferri’s poem is a direct response to that of Bronzino. As I was also asked to set sonnets by Petrarca, I chose two of his closely linked sonnets, numbers 229 and 230 in the Rime Sparse. Having written the Petrarca setting for I Tatti some five years before, I was familiar with the context. Petrach’s sonnets attracted me for many reasons. Initially it was because they have such prominence in sixteenth century madrigal music. But it was also the heart-rending beauty of the poetry and its sheer technical brilliance.  Although I was vaguely aware of Bronzino as a painter, I did not know his poetry and I was grateful for the opportunity to look at previously unfamiliar texts, both of Bronzino and of Battiferri. Indeed having such things brought to my attention made me feel a surrogate part of the Villa I Tatti environment., I always felt during the time that I taught in a university that being alerted to previously unfamiliar work – and following up that prompting – to be one of the chief pleasures of being in an academic community.

The third project concentrates on the poetry of Laura Batiferri alone, and comes about because of the anniversary celebrations for her husband Ammannati. Kathryn Vosi sent me a number of texts and eventually I settled on four : three sonnets, one of which has 11 lines rather than the normal 14, and a sestina. From the poems that she sent there are two further ones that I plan to set so that, in due course, there would be quite substabntial volme of I Tatti madrigals that could form an entire book in themselves, combining Petrarca, Bronzino and Battiferri. These two “bonus” pieces will set a poem by Bronzino plus Battiferri’s response, like those from the second concert. As with the commission two years ago, these madrigals are for Singer Pur, and there is the advantage this time of having worked with them directly at I Tatti, of spending time with them socially and having a greater awareness of the character of this quite special ensemble. The two 14-line sonnets, numbers 53 (“Fra queste piagge”) and 54 (“Ergiti enfin”), have a link to the area near I Tatti, with their references to Maiano, and to the Mensola, and the shorter sonnet 55 (“Temprato aer sereno”) also sings the praises of Tuscany.

With the sestina number 48 “Qual per l’onde turbate” we have the same kind of poetic virtuosity demanded of the 39-line form that I enjoyed with Petrarca’s “A qualunque animale”. This form has six 6-line verses with a final 3-line verse), with the same six words at the ends of the lines in each verse, but in each succeeding verse on a different line. For the final three lines all six rhyming words are brought back, three of them as half rhymes. As with my seting of the Petrarca sestina, I followed this device by devising precise musical equivalents. With Petrarca this involved having  different cadential phrases associated with each of the six words, and finding ways to join them that don’t point to the apparent artifice. With the Battiferri setting, I followed the same structural idea, but becoming more flexible by injecting greater variation in these phrases as the poem progresses.

It was the promptings of I Tatti that started me off on my settings of Petrach’s sestine, through Kathryn Bosi and others, and which pointed me towards the poetry of Bronzino and Battiferri. I enjoy the intellectual give-and-take, and being encouraged to follow these promptings. After my second project at I Tatti for example, Dr Janie Cole, whom I met at the concert, sent me her book on the work of Michelangelo Buonarroti il Giovane and it is very likely that I will set some of this poetry in the future. As a professional composer, I live from commissions and these can take me in many different and sometimes unpredictable directions and I welcome the stimulus of such exchanges. In an ideal world, when I would be free to write whatever I want, I would always chose to write vocal music, and having the pprotunity to set Petrarch and post-Petrarchian seicento poetry, is close to Paradise. 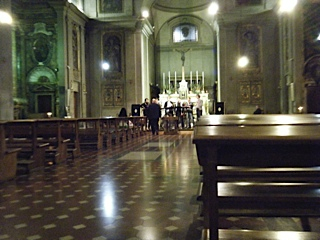 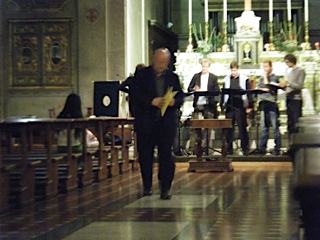 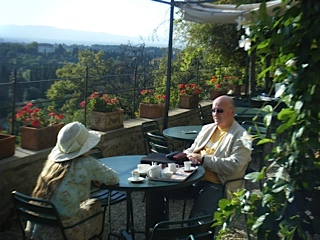