This installation, devised by the Quay Brothers involved several components. For “Overworlds” I wrote a number of songs for children’s choir and percussion ensemble/recorders based on the music of Carl Orff, but with new poems by Blake Morrison. The songs were performed in a very beautiful Victoria archade in he centre of Leeds by the children’s choir of Opera North, with the new songs being sung directly after the Orff song from which they derived.

Underworlds had a sound installatuon, designed by Mic Pool, which combined many recorded elements – rehearsal material from the children’s songs, recordings of low brass, wind and percussion from the orchestra of Opera North, Leeds Parish Church bells, and many other sources. There were several hour-long pieces which were fed into various spaces in the arches below Leeds railways station. This is an area know as the Dark Arches, where the River Aire had been diverted from its course to allow the station to be built in the 19th century. The performance went on for several hours. Different dance ensembles created dances in these spaces, using the installation sound as a source.

The image shown here was created by sound designer Mic Pool and is one of the most stunning images from the whole event. 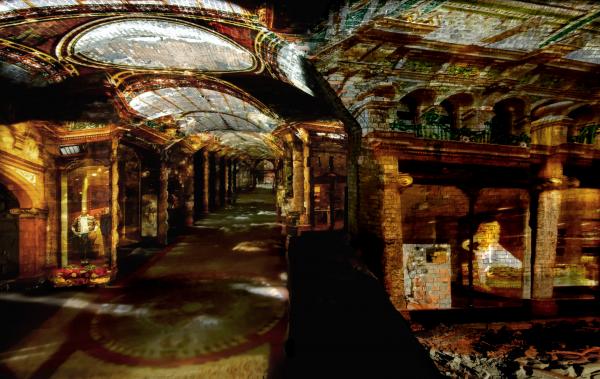