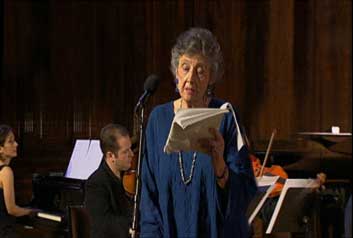 (The title of the film was changed for the CBC broadcast to ‘Last Summer.’)

The title of PK Page’s story ‘Unless the Eye Catch Fire…’ is a quotation from a poem by Theodore Roszak’s Where the Wasteland Ends (‘Unless the eye catch fire The God will not be seen…).

The text describes the actions and thoughts of an elderly woman living in a quiet garden suburb during the final few months when the Earth warms up.

The story suggests that during this time certain individuals have visions accompanied by vivid colours and a sense of well-being. The protagonist of the story is one of these visionaries, and as the temperature rises, her visions become more complex and more real. Eventually, sealed in her home with its many recent layers of thick insulation against the heat, the old lady and her dog unite, in her mind, joyously, with a universal cosmos.

While on one level an example of poetic science-fiction on ecological issues, the story unfolds the metaphysics of the transient human existence and deals with death as a transition dissolving borders between the human soul and universe.

The film ‘Unless The Eye Catch Fire…’ featuring PK Page as the author as well as the protagonist of the story, is a blend of documentary, live-action drama and computer transformations of the image. The border between ‘real’ and ‘invented’ is blurred from the very start when the first vision of colours occurs before the story is written/read on the screen. At this point PK is not identified as Babe, the protagonist, and the visionary experience becomes her own. . . reality? a dream?

Another level of interpretation is suggested almost immeadiately: the spectators are invited to a concert, the first world performance of music ‘Unless The Eye Catch Fire…’ written by Gavin Bryars. The music, written and performed for the film, becomes a part of it. The performance, starting with on-stage reading of an extract from the story by PK Page, took place in Victoria, B.C. in June 1999. The concert is documented in the film where, after first few minutes of the recital, the music yields to the image, becoming an audio backbone upon which the visuals are formed. PK Page (whose narration continues as a voice-over) becomes Babe. When the narrative is interrupted by our return to the concert hall to see the performing musicians, the music is brought on the foreground to comment on the story, to transpose it into a different dimension, but also to serve as a frame within which the story happens. There are no final answers, no final truths; while the world is burn out and the earth ceases to exist, Babe/PK transcends into a different level of existence (dissolved into colours), the musicians leave the stage, the public disappears and there at the end is only a little girl who picks up the manuscript (the text? the music?) left on the empty stage and exists the hall…

What can reassure us that the world is still continuing and our vision is not suffering ( why is it always suffering, never enjoying? asks Babe in the story ) from any abnormal colour perception?