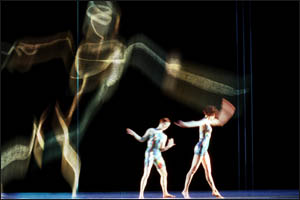 Find out additonal information about the Biped album, released on Gavin Bryars’ own label, in the discography section.

It is one of the first new musical compositions commissioned by them since the death of John Cage in 1992. Like all of Merce’s work it involved a collaboration with visual artists, in this case Paul Keiser and Shelley Eshkar who had developed a very striking technique of video motion capture. In working on the music Merce and I agreed that we would follow the method established between himself and John Cage of working independently but towards a common goal, thereby avoiding any planned one-to-one relationship between music, dance and decor, but working to the same overall programme length, here 45 minutes.

Merce and I did exchange faxes to give each of us pointers as to the other’s thinking, and I did see examples of the animation techniques which were to form the work’s design. When I asked if he had ever spoken with John Cage in advance about the work’s structure and form (how many sections, whether dancers formed duos, trios, quartets ensembles and so on) he said that he always did, but equally that John always ignored the information..

I had worked with John in the late 1960’s and his work had been a key factor in my decision to move away from improvised music towards composition. Indeed, seeing the Cunningham company in London in 1966 represented a key moment in my artistic development. The very first piece I saw was a solo called Nocturne, danced by Merce, designed by Robert Rauschenberg and with Satie’s five Nocturnes for solo piano played by John Cage. Merce wore a white costume, there was a white gauze behind which he danced, and pure bright while light on the gauze, behind it and in front of it, produced a stunning effect.

In BIPED, just as, with the visual element, there is live dance and its digital shadow through the projected video animation (curiously, like the very first piece I saw, projected on to a front gauze) so I chose to have a form of digital replication within the music. The live instruments (electric guitar, cello, electric keyboard, acoustic double , violin and percussion) being reinforced by their electronic equivalents. The sampled material is played by members of my ensemble, who are also the live performers whenever possible, with the addition of Takehisa Kosugi, the Cunningham company’s music director since Cage’s death, on violin and improvised percussion. The music falls into six (unequal) sections and is played without a break.