During the 1970’s I worked in composer/performer ensembles with composer friends such as John White, Dave Smith and Christopher Hobbs. We played each others’ music, writing for each other as performers and accepting the frequent oddity of the ensuing instrumentation. The ethos was one of mutual respect, musical trust and an ability to understand forms of musical shorthand.  The first time that we gave a concert entirely of my work was at the 1979 Festival d’Automne in Paris, in the Chapelle de la Sorbonne when I augmented the group with 3 of my students to perform pieces such as The Sinking of the Titanic.

In 1981 John White and I put together a combined ensemble for a Regional Arts Contemporary Music Network tour which featured, more or less equally, works by each of us, played by a group which included many of the formidable musicians performing John’s music for Arthur Miller’s Death of a Salesman at the National Theatre.  When I started my own ensemble I worked on the principle that pervaded our early work – that first and foremost the ensemble should comprise musicians with whom I wanted to work rather than players who were there simply because I needed certain instruments. For this reason the ensemble has often had an unusual line-up. In 1986, for example, there were 6 players: violin, clarinet, piano, 2 percussion, bass, with the last four all playing percussion and one of the percussionists also playing recorder.  My current ensemble is much larger, between 5 and 12 people according to repertoire, but all are versatile musicians being essentially chamber music players who are also exceptional individual soloists. 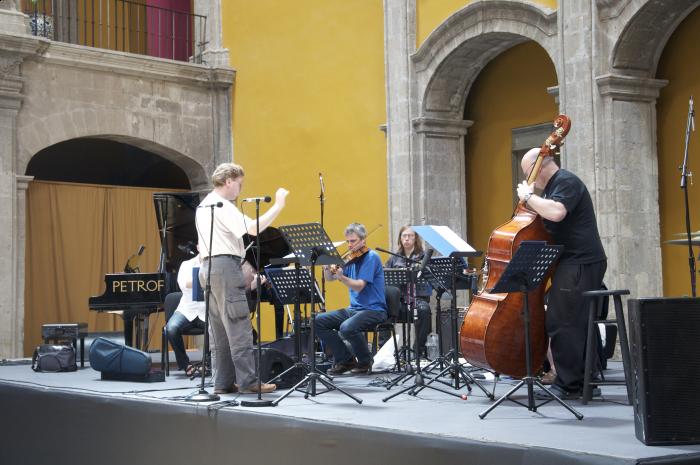 The ensemble has changed over the years, and many fine players have either been members of the ensemble or have performed with it on specific occasions. My closest musical colleague Dave Smith has been with me longest, and we worked together even before my ensemble came into being. The only time that I have performed in New York, for example, was when Dave and I gave two curious duo-piano concerts at The Kitchen in 1978. He was also in the group which played in Paris in 1979 though, because of the need to cover university teaching for myself and John White, he did not tour in the 1981 band.

1986 was the first time that the name Gavin Bryars Ensemble was used, when we performed at the Flanders Festival in Ghent. The ensemble comprised violinist Alexander Balanescu, clarinettist Roger Heaton, Dave Smith and myself, along with two of my ex-students Jamie McCarthy, who did the recorder solo in Sub Rosa, and percussionist Andy Bilham. When I gave a series of concerts at the 1987 Almeida Festival in London I added percussionist Martin Allen, who had earlier been one of the six percussionists in the first performance of Effarene, as well as Leslie Howard, one of the great virtuoso pianists of our time.  For the 1988 Arts Council Contemporary Music Network Tour I added another great virtuoso pianist Martin Jones to the group, and we used the Balanescu String Quartet in its entirety so that we could perform multi-keyboard works (Out of Zaleski’s Gazebo for two pianos 8 hands featured Leslie Howard, Martin Jones, Dave Smith and myself) as well as the First String Quartet. The programme’s chief feature was the first performance of Doctor Ox’s Experiment (Epilogue), an extended vocal draft for my subsequent opera, which was sung by Sarah Leonard. This was also the first time that Chris Ekers, my sound engineer, worked with the ensemble and his sound designs have become a critical part of the ensemble’s live work.

The next stage in the ensemble’s evolution came when it became clear that Alex Balanescu’s complex performing schedule meant that he could not always join the ensemble. The crisis came with a large-scale public concert, featuring the first performance for many years of Jesus’ Blood Never Failed Me Yet, at the time of the release of the new version in 1993. At this point, having considered a number of fine solo violinists, I decided that Alex was not replaceable by another violinist (indeed, looking for an equivalent instrument was an unconscious violation of the unstated principle of the ensemble’s rationale) but rather by a superb player on another instrument. Viola player Bill Hawkes was then a member of Alex’s quartet and I re-wrote some of the music for him. His presence, and in rapid succession the arrival of cellist Sophie Harris and guitarist James Woodrow – each following periods of work with them with other groups (The Smith Quartet, Icebreaker) – defined very quickly a new sonority in the group: that of low strings. 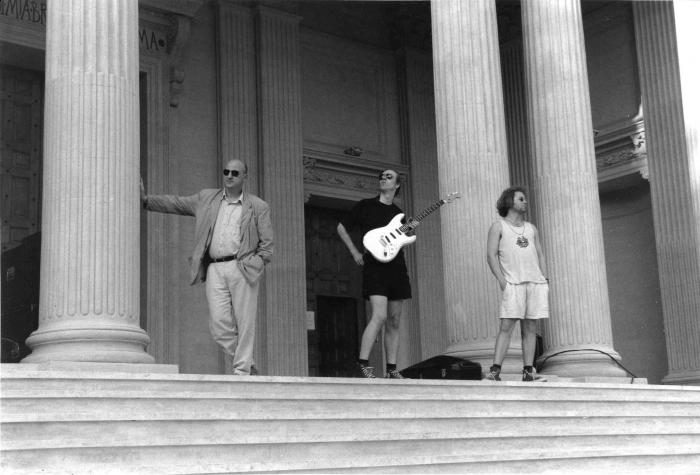 The formation that I favour (2 violas, cello, bass, electric/acoustic guitar, bass clarinet/clarinet, keyboard, percussion and, periodically human voice, has been in place for several years. I wrote new works for these players and rescored existing pieces. I also rethought old pieces such as The Sinking of the Titanic for this formation. Of course, the music has always to be playable by other interested performers, but the important thing is that the music is written in the first place for my players, personal friends as well as close colleagues, with their individual musical characters and their particular sounds in mind.

After the concerts in 2000 there was a break of two years in which the ensemble did not perform at all, although members of the ensemble took part in other projects with me. In 2002 I reformed the ensemble adding the soprano Anna Maria Friman initially with the intention of being able to perform Adnan Songbook more frequently. The Canadian soprano, Valdine Anderson, who had been associated with the work and with whom I made the recording, now lives more or less permanently in Winnipeg making it more difficult to programme this work. At the same time I also changed some of the string players. This group first performed together in Valencia in May 2002. The addition of Anna also made it possible to include other vocal works as well as the unaccompanied Laude that I have been writing for her as an ongoing activity. Shortly after Anna joined the ensemble, John Potter, who I had worked with in the Hilliard Ensemble since 1988, also started to sing with us regularly and this helped define the character of the current ensemble.

Over the last few years the basic ensemble, to which others are added according to repertoire, has become Morgan Goff, viola; Nick Cooper, cello; James Woodrow, electric and acoustic guitars; myself on double bass and sometimes piano. If I need a second viola, sometimes needed for some vocal repertoire for example, I add Nick Barr or Katie Wilkinson. For a second cello I add Audrey Riley – for almost all the later performances of Biped, the group was Audrey, Morgan Goff, James Woodrow and myself. If I need piano then my daughter Alexandra Maria Tchernakova is the regular pianist

I also have the Gavin  Bryars Family Ensemble which adds ny four children to the nuclear group: Ziella Bryars, cello; Orlanda Bryars, cello; Yuri Bryars, bass/piano; and Alexandra Maria on viola in addition to her regular piano. Orlanda is also one of my singers…

There are various combinations of players used according to repertoire (some pieces need sound design as part of the work) and performance space (some performances involve no sound reinforcement). Programmes can be constructed in many ways, the following are examples of recent programmes – any of which can be done, or modified according to availability of new works. Older pieces, such as The Sinking of the Titanic or Jesus’ Blood Never Failed Me Yet, are either performed as single works in entire concerts, or as a work in the second half of a concert where the first half contains more recent work. These pieces may also involve extra players.