In March this year Long Beach Opera created a new production of Marilyn Forever at the Warner Grand Theatre in San Pedro, California. There had been performances earlier that month in Adelaide of the original Canadian production, though with a different cast from that of the premiere in 2013. Andreas Mitisek’s production involved having two singers play the part of Marilyn, that is the part was divided between them (and occasionally they sang in unison). One was the more introspective, melancholic Marilyn, the other being the outgoing, vivacious star. They were on opposite sides of the stage, separated by a sideways-on dressing room mirror, except for the final, posthumous scene, when they came together.

He also used many film devices such as projections of old footage, still photographs, but most originally he had the two singer swho make up the small choral element, The Tritones, carry small video cameras. The images from these camers showed close ups of the live action and were themselves simultaneously projected on to screens and gauze.

The production was a revelation.

As in Victoria and Adelaide, I played the on-stage jazz bass part, though only for the first night… 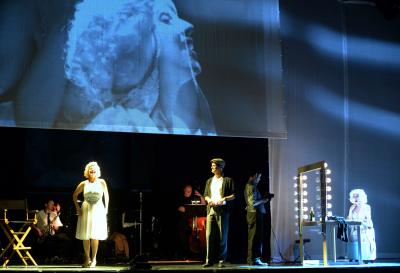 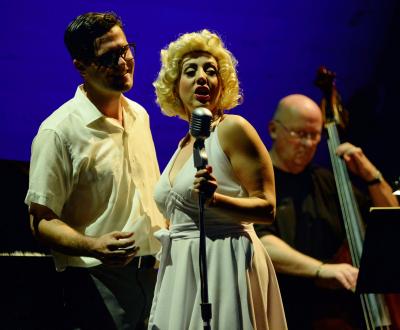 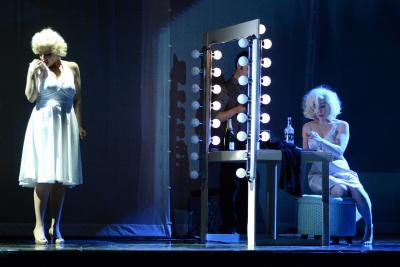 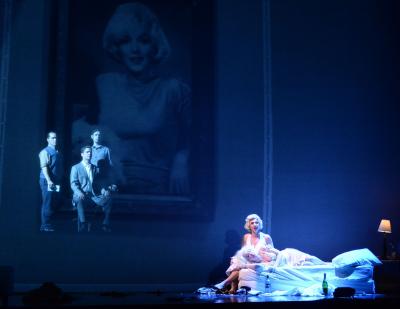