A documentary about a joint musical endeavour of a small village in the Midlands and internationally acclaimed British composer Gavin Bryars.  Three years ago the inhabitants of a small village, where Gavin Bryars lives, asked if he would agree to compose a piece of music which could be performed together by people of all ages and all abilities  – farmers, workers, children, retired folks – in the village hall on the Millennium Eve. The documentary, comprising footage shot over three years, shows what happened next and how the music project transformed the life of the village – a fascinating story about ordinary people united in an extraordinary communal creative effort.

The film itself tells the story so I will add a brief note as introduction.

In the Autumn of 1998, I had been approached by someone in the village, Fiona White, about the possibility of me composing a piece of music for the millennium evening, December 31st, 1999. There was a meeting arranged in the village hall to explore the possibilities, for anyone to attend who might want to take part in this piece. I explained how I generally worked and tried to get a sense as to who might want to be involved. I devised a simple questionnaire that asked about their musical experience – what kind of music they played, what was their instrument or voice, whether they’d taken any music exams, whether they could sight read and so on. The resulting ensemble was much larger and more diverse than I could have imagined. Anya’s first visit to Billesdon coincided with that first meeting and she had the idea to film it, so I borrowed a professional camera from a film producer friend, which Anya was able to use.

For most of the following year I was travelling back and forth between Billesdon and Victoria BC. I wrote the music, based on information I had about those who would be involved, and alongside many other musical projects that I was doing during that time. I would send stuff over from Canada and meet people from the village whenever I was in Billesdon. But it was quite late in the day when I was actually able to produce a real score and set of parts. The ensemble was actually quite big: I had twelve singers – a mixture of the church choir and others from the village; there were four cellos, one violin, three trombones, two saxophones, flute, oboe, drum kit, three electric guitars, two electric keyboards, a set of six players playing hand bells (used for the church bell-ringers to practice). For the text I did a setting of the Caedmon Creation Hymn, in a mixture of Latin and old Anglo-Saxon, part of which I had used in Cadman Requiem over ten years before.

My Canadian family eventually moved to England, arriving on Christmas Eve 1999, which was in the final run-up to the performance. I also added an extra keyboard part for my stepdaughter Mashka, who was 6 at the time, so the family was quickly integrated into village life straightaway

Having filmed that initial meeting, Anya also managed to film some of the last rehearsals as well as the performance itself. A friend in the village, Tony Steele happened to have a number of cameras of different formats which he provided (I didn’t know at the time that Tony was one of the top international referees of speedway racing, but then he probably didn’t know I was a composer…). Quite remarkably she had our baby son Yuri in her arms throughout the time that she was filming.

She subsequently managed to reconcile the different video formats to provide archive footage of the event. Later, at a calmer time, she added interviews and recollections by those involved and put together this touching documentary called Billesdon Millennium Music. 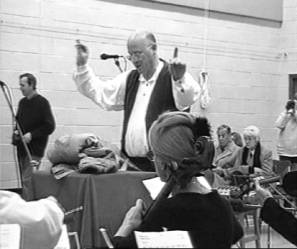 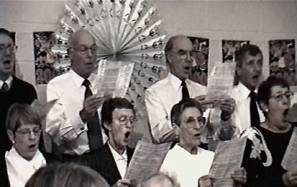